will start again in the New Year on:

Put the dates on your calenders!!!!

If you need info that's not on the website, 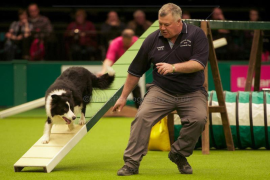 Both Andrew and Carol have been training dogs for many years. The pinnacles of both their careers have been competing at Crufts - Andrew in Obedience and Agility and Carol in Agility.

Some recent information about us:

Andrew has been a Kennel Club Member since 2006, and has been the Chairman of Thames Dog Training Club since 2004.

He is on the Main Committee of the KC International Festival and Arena Manager, the Main Arena Manager at Discover Dogs, Earls Court 2012, 2013 & 2014.

Since 2008 Andrew has been the “specialist” Agility commentator in the TV commentary for Eurosport, Horse and Country TV and BBC at the International Christmas Horse show at Olympia as well as at Crufts when not competing or judging.

Andrew was also the Agility and Main ring commentator, judge and trainer for the Dubai Pet Show held in February 2013 in the U.A.E.

We have trained and worked at Championship level.

As a judge Andrew has judged worldwide, as far as Holland, Jersey & Singapore as well as in the UK

Andrew and Carol both have trained and worked at Championship level.

Between them Andrew & Carol have competed at Crufts every year since 2009!!

Carol and Mali qualified for the Olympia Semi-finals in 2014

Andrew and Joker won THREE qualifiers for the Olympia Semi-finals 2015!

In terms of Judging, Andrew is a KC Championship Judge, International Judge for Italy, Holland, Jersey, Spain, USA, Dubai,  Singapore as well as in the UK as well as being an FCI (Fédération Cynologique Internationale) International judge AND an American Kennel Club Excellent/Master Judges (license #96505)

The highlight of his judging career to date was judging the 1st ever Westminster Agility Challenge at the famous Westminster Show in New York in 2014.  He continues to be in demand worldwide both as a trainer and as a judge. He will now be the first judge EVER to judge Westminster in New York TWICE as he has been invited back for 2023.

He will be judging in the mair Crufts arena in 2024

2016 took him as far afield as Jersey, Italy, Norway and the USA as well as national judging appointments.